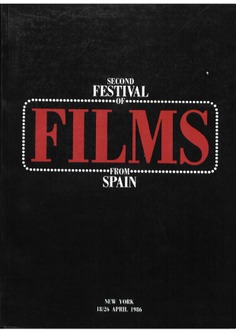 For the second time in the past few years, Spanish
cinema has returned to Hew York's Rockefeller Center.
It is our desire to make these showings a regular
event, as well as to afford critics, fans, and people in
the industry the opportunity to keep in constant
contact with Spanish films, and to keep abreast of their
development and evolution.
Why in hew York? Because we are aware that in
addition to being the most important city in the
greatest moviemaking power in the world, Hew York is
currently one of the most representative and fervent
capitals of universal culture. Here the most outstanding
cultural happenings take place, and here is
where the most polished artistic endeavors are
produced and offered to the public.
For these reasons, we hope that our cinema, which we
consider to be a fundamental aspect of our culture, will
continue to be on the scene in New York.
Through these nine pictures that make up the
festival, we are attempting to offer a brief though
significant panorama of our 1984-85 movie production,
the restlessness and desires that have motivated our
creators, the subjects that have caused their unrest and
given them their motivation, as well as their discoveries
and contributions to the «7th Art», which is passing
through one of the most interesting stages of its
history as it nears its 100th birthday. Other films have
not been included, for various reasons ¿some have
been screened recently in the United States, while
others will be soon.